Blender is like WeWork but for the culture crowd â A new entrant into the shared-office industry aims for upscale.

By Matthew Flamm â AS SEEN IN CRAIN’S NEW YORK

Kriss & Feuerstein LLP served as counsel to the tenant in this matter. 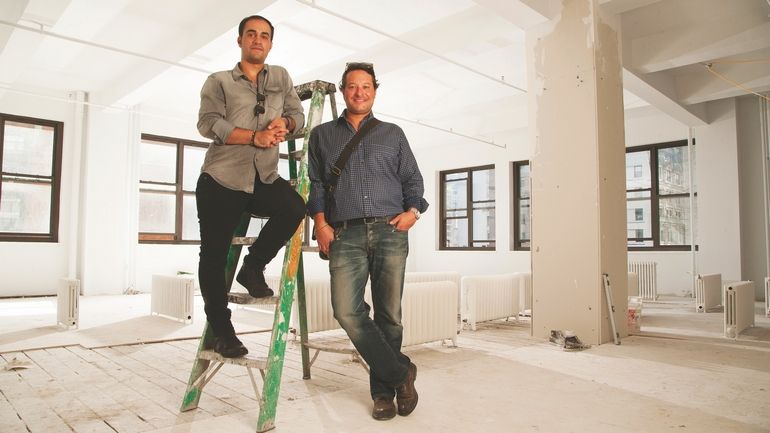 Blender co-founders Amro Qaddura and Scott Sassoon will transform this floor at 135 Madison Ave. into an upscale co-working space.

For the nine months that Jeffrey Fidelman headed investor relations for a startup based at a Manhattan WeWork location, he found the shared space a fine place to work. He just didnât like bringing investors there.

âIf I wanted to have a sophisticated sort of event, I was left looking for other places,â he said.

Fidelman still supports the shared-space concept that WeWork has come to represent. He just wants to try a variation. The independent financial adviser plans to set up in Blender Workspace, a new co-working enterprise designed to make the moneyed crowd and their solicitous hosts never want to leave.

Taking up the eighth floor at 135 Madison Ave., Blender will be the boutique hotel to WeWorkâs lodging-chain experience, according to co-founder and Chief Executive Scott Sassoon, a luxury-residential contractor backed by private investors. He expects the 14,430-square-foot space to open in the first quarter of next year.

And though Blender will be different from WeWork, Sassoon and his partners envision a national network of locationsâexcept that these will offer upscale design, obsessive customer service and event programming for a cultured crowd. Among the amenities planned are a lounge and events area served by its own elevator, offices with soundproofing and frosted glass, a cafÃ© with a select gourmet menu (but no free beer on tap, a WeWork hallmark), a âwellnessâ room for meditation and quiet work, and a reception area reminiscent of a luxury hotelâs.

As with many new businesses these days, the idea took shape at a WeWork. Sassoon and co-founder Amro Qaddura spent four months taking notes on their competition inside a Madison Avenue location.

âThere were many good things, and many things we wanted to improve upon,â Sassoon said. âFor the most part, we felt we could offer a much better level of service and hospitality to a group of professionals who appreciate a beautiful aesthetic and a more boutique experience.â

Like other co-working spaces, Blender will offer access to payroll, legal and accounting services, health insurance, high-speed broadband and pretty much anything else that entrepreneurs need. Sassoon is eyeing three more locations in the city, as well as more space at 135 Madison Ave. He said that about 20% of the desks at Blender are spoken for.

It will hardly be the first co-working space to aim for the high end. NeueHouse, which has one location in the Flatiron district, has an invitation-only admissions policy and prices that start at $1,300 a month. Blender will be positioned more in the middle range. Rents will run at about 10% to 15% higher than at WeWork, where desks go for $350 to $500 a month and offices from $650 to $1,000, depending on the location.

Blender will hit the market as the co-working wave shows no sign of cresting. Real estate research firm CompStak counts a dozen co-working leases signed in New York City in the past 12 months, for a total of 1 million square feetâalmost double the space in the previous 12 months. WeWork, which has 19 locations in New York and at least two more on the way, raised $400 million in June, putting its valuation at $10 billion.

But questions have arisen over whether WeWorkâs growth is sustainable. Even the broker who handled the deal for the owners of 135 Madisonâand who plans to use the workspace as a showcase to help reposition the property from its garment and rug trade rootsâwonders whether workspace operators could weather a downturn.âTheyâre signing long-term obligations, and they have short-term funding [from their tenants],â said Michael Moorin, senior managing director at Newmark Grubb Knight Frank, who added that he couldnât see leasing the company more than one of the four soon-to-be-vacant floors beneath it.

Sassoon argues that Blender is well positioned for a slowdown. His 10-year lease, he said, is nearly 30% below the market average in midtown south, where asking rents have shot up to $71 per square foot. A downturn could lead to an increase in freelancers as well as small companies not wanting to spend much on office space or make long-term commitments, said angel investor Teddy Downey, a Blender backer whose other investments include ride-share company Lyft.

The growth of the freelance economy has changed how businesses operate, said David Rose, a former real estate executive and CEO of Gust, a platform for investors and tech startups. âThere is virtually an insatiable need for this new kind of flexible, shared real estate,â he said.

See this article in its entirety at Crain’s New York