ByÂ Mark MaurerÂ âÂ AS SEEN IN THE REAL DEAL 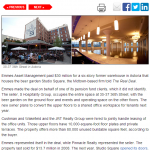 Emmes made the deal on behalf of one of its pension fund clients, which it did not identify. The seller, S Hospitality Group, occupies the entire space at 35-37 36th Street, with the beer garden on the ground floor and events and operating space on the other floors. The new owner plans to convert the upper floors to a shared office workspace for tenants next year.

Cushman and Wakefield and the JRT Realty Group were hired to jointly handle leasing of the office units. Those upper floors have 10,000-square-foot floor plates and private terraces. The property offers more than 80,000 unused buildable square feet, according to the buyer.

Emmes represented itself in the deal, while Pinnacle Realty represented the seller. The property last sold for $13.7 million in 2008. The next year, Studio SquareÂ opened its doors, as previously reported.

A spokesperson for S Hospitality Group not be immediately reached for comment.

Along with partner SL Green, Emmes entered contract in April to sell a nearly 90,000-buildable-square-foot development site on the southeast corner of East 59th Street and Third AvenueÂ to Harry Macklowe for $100 million, as previously reported.