ByÂ Adam PincusÂ âÂ AS SEEN IN THE REAL DEAL 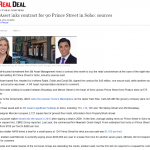 The retail-focused investment firm Sitt Asset Management inked a contract this month to buy the retail condominium at the base of the eight-story residential building 90 Prince Street in Soho, industry sources said.

The Midtown-based firm, headed by brothers Ralph, Eddie and David Sitt, signed the contract for $49 million, one source said, while another source said the actual price was lower. A Sitt Asset representative declined to comment.

The 36-foot-wide building is located between Broadway and Mercer Street in the heart of Soho across Prince Street from Pradaâs store at 575 Broadway.

The seller is the Doria family, whichÂ owns the popular Graceâs MarketplaceÂ on the Upper East Side. Calls left with the grocery company were not returned.

This purchase would add toÂ Sitt Assetâs significant holdingsÂ in Soho, including 113,Â 138, 145 and 169 Spring Street and 450 Broadway.

Cosmetics retailer NARS inked a deal for a small space at 124 Prince Street for what sources said wasÂ $1,100 per foot.

Industry insiders said Moncler is currently paying about $830,000 per year in a lease that runs for another seven years. Moncler did not respond to a request for comment.

Karen Kemp and Daniel Soares of the Corcoran Group are marketing the condo, insiders said, but the firm did not respond to a request for comment.